99% of the Disk is being eaten up by OS processes?

Plugs in the computer.
Is this normal at all?
Mb tell me what can be done, how to fix it and what is this "Disk" in general? 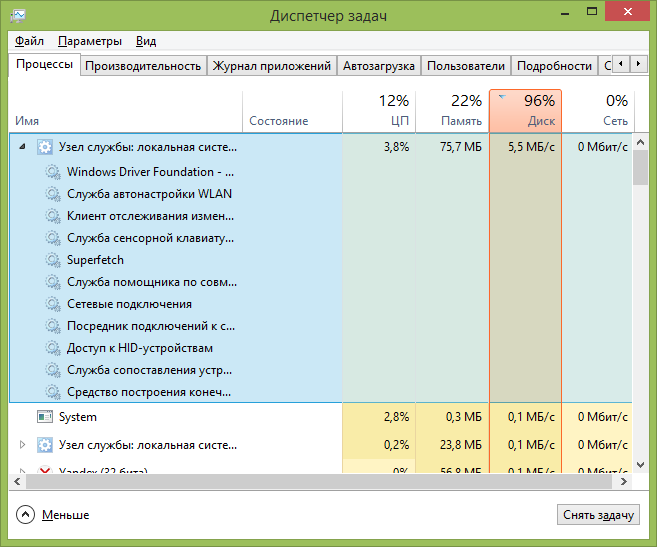 Some process writes to your disk at a tremendous speed, of course, the disk is overloaded and cannot cope.
Therefore, the brakes simply must be.
Do not use the disk so actively, or install a faster disk, such as an SSD.

Perhaps the indexing service (Windows Search) or superfetch eats up all disk iops.
To check from the command line, issue the following commands in turn:

sysmain - superfetch
wsearch - indexing service (in Win10, not sure on earlier versions).
First give one command and look at the effect, if it doesn't help - another.
Nothing will happen to Windows, after rebooting the services will start as usual.
If this is not the case, then the disk may fail - look in the Windows log for disk errors.
Report
A
Anton Zhukov, 2016-03-07
@MrCheater

"Disk" is the process's use of read/write disk speed from the maximum possible.
For example, if some antivirus starts using the disk at 100%, then Windows practically stops responding to user actions - programs, menus do not open, only the mouse moves and that's it

Disk is the read speed of the disk.
And it is right.
What to be afraid of.

Perhaps your hard drive has begun to "spoil". There was such a problem on the hdd hard drive in the laptop. After changing the hard drive, the problem went away.
IMHO, I advise ssd, life will become more beautiful.